When I was younger, I remember that whenever it got to Christmas time, my Mother would always secretly wish that the weather wasn’t great. I know, right? This was because, unlike a typical Christmas day in the land of the long white cloud, it reminded her of home, where there was a good chance of having a white Christmas.

However, the same does not sit true for me, and I would much prefer sitting on a warm beach. This isn’t easily achieved in Europe in December though, which is why myself, my cousin and my mate Rob decided to head a little further south and escape the gloom that was Holland for a little slice of home. 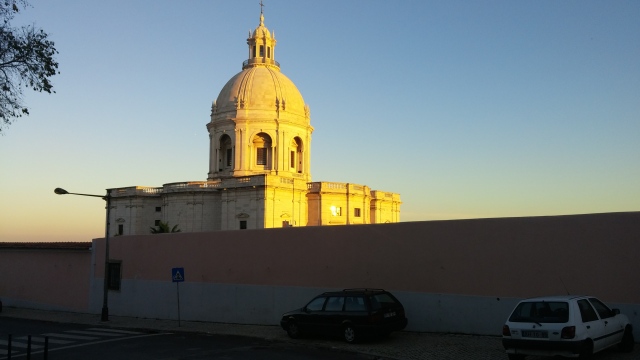 We managed to find some reasonably priced flights into Lisbon, the capital of Portugal, and set off a few days before Jesus’ birthday. I was quite excited to explore Portugal, having heard stories of great food, better wine and a relaxed atmosphere. A positive aspect about visiting Portugal is that it isn’t very big, meaning you can adequately cover quite a lot of it without moving about too much.

Upon arriving in the capital, we checked into an AirBnB and set about exploring the city on foot. One thing to note about most of Portugal is that it is not flat. At all. Be prepared to tackle a lot of hills and for your legs to get a workout, even more so if you’re used to the pancake that is Holland.

They’re not a fan of boring buildings in this country either. Loads of them are decorated on the outside with tiles. It’s like they got the tiles from the bathroom and stuck them on the walls instead.

In Lisbon, Tram 28 is your friend. We bought 24 hour day passes for the public transport, and definitely got out money’s worth. It’s also a much preferable option than walking up hills after you’ve been trying out the local wine.

As well as being a good way to get around, the tram is frequented by tourists as a very cheap way to get a tour of the narrow, winding streets of the old town. Riding in one is quite the experience, they’re all manually operated and very clunky. It’s entertaining to watch how close they get to parked cars on the side of the road. Good times. 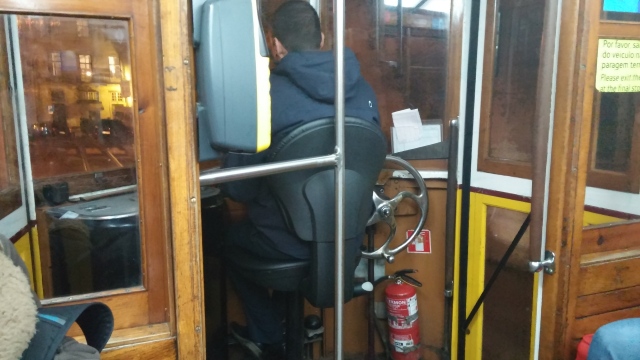 There’s a really chilled out cultural vibe to Lisbon. On the way home one night we walked past a huge light show which was being projected onto a big building in the main square. While it’s not uncommon for people to drink wine in the streets, you’ll hardly see anyone behaving badly in public areas.

Something else that we took a few days to learn is how the typical day schedule of a local is different than ours. It’s common to have dinner at around 9-11pm, then slowly head out and take it slowly, seeing where the night takes you before heading past a bakery on the way home as the sun comes up.

The best coffee I found in Portugal was at a place named Fabrica. Would recommend!

As you’d expect, there’s a lot of history too. We didn’t too too much historical sight seeing but we stopped in at the Carmo Convent, a ruined Gothic Church. The entry fee was around 3 Euros.

Included in our public transport passes were tickets to travel in what is probably the strangest elevator I’ve ever been in. The Santa Justa lift, designed by the same guy  is in the middle of the city, and if you looked at it from most angles you’d think it just goes to nowhere. There is a path up the top that takes you to a nice little bar where you can enjoy a Sangria and check out the views.

Worth noting is a public toilet near the water that you pay to use, but allows you to select your own colour of shit-tickets. Sensational.

Most men that we spoke to in Portugal had one of a handful of names; Joao, Miguel, jesus or Pedro. Maarten found Jesus on this trip.

On one day we took a day trip to a place called Sintra. It’s near the west coast of Portugal and is home to the Pena Palace, an awesome Roman castle that you can explore. Take a Tuk-tuk (yes, they have a lot of them here, because fuck hills) up the top and you’re rewarded with some good views.

What European winter?! I tried to spot New York, but it mustn’t have been a very clear day over there. 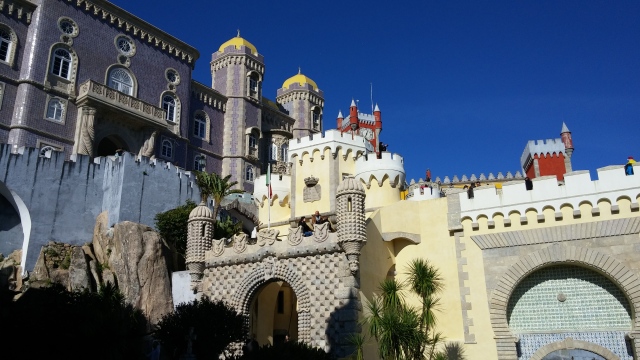 On more than one occasion, we got a bit carried away with the ridiculously cheap wine and Port that this country has to offer. Sitting down with a glass and watching the sun set is a definite recommended activity! 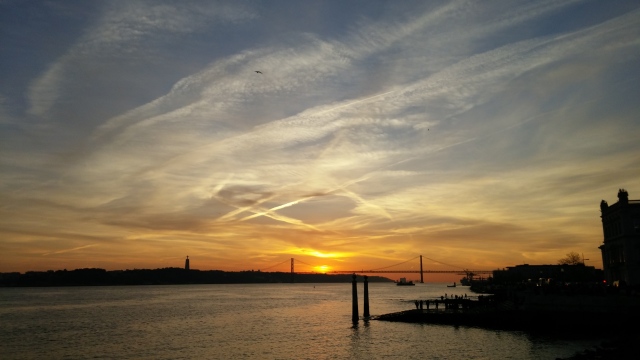 After a few days in Lisbon, we took a local train a couple of hours north and stopped in at a place called Coimbra. Renowned for being a vibrant student town, we soon found out that we picked the wrong time of year to get involved in university parties and nightlife, as it was Christmas. Duh.

Finding something to do other than gatecrashing student parties, we walked up and down some more hills and found a couple of nice spots. To be honest there isn’t a hell of a lot of activities to do here when it’s this time of year, but the weather was good and the beer was cheap! 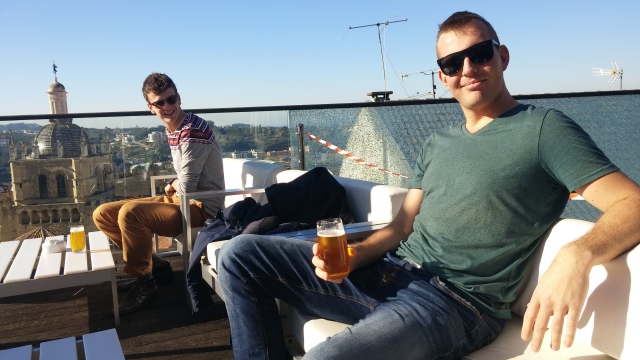 Coimbra is home to a university that is so old it’s a UNESCO world heritage site. It was built in the 1200’s and is still in use today. 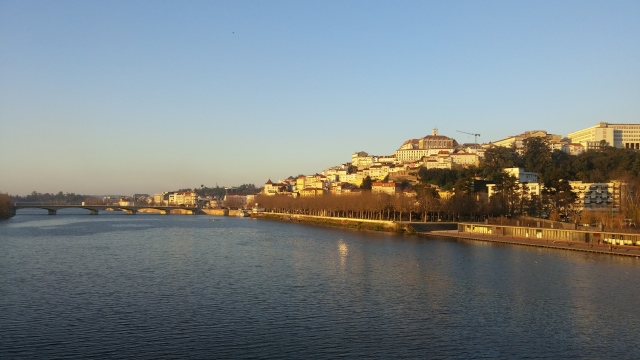 One restaurant you need to visit in Coimbra is a small place named Ze Manel Dos Ossos. It’s so popular that there are constant lines outside to get a table. The owner recommend what to eat, and he was spot on, giving us about 5 courses of delicious local food.

The whole meal came to around 15 Euros each including a pitcher of A+ wine. Portugal is so cheap for us as foreigners. Minimum wage here is ridiculously low, around €2.50. 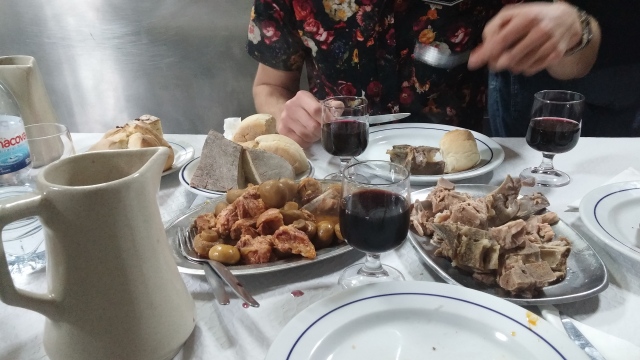 I’d definitely recommend Lisbon as a travel destination. It’s cheap, fun and relic. Coimbra, I feel, needs to be visited when everyone hasn’t left the city to go and visit family. Live and learn!

One thought on “Portugal: Lisbon and Coimbra”