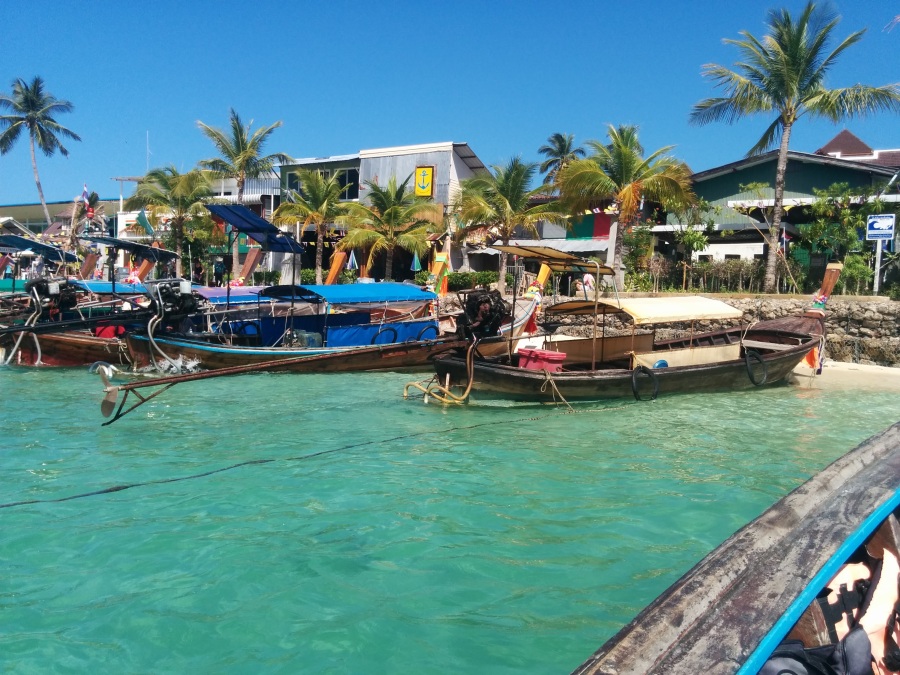 First off, sorry for the delay in a new post. I’ve been without my laptop as the one I took with me broke and it’s just too difficult to put together a proper update on my phone!

Aaaaanyway, I’ve been in Vietnam for the last week but I’m going to backdate a couple of posts on here to cover off what I’ve been doing the last month or so. I’ll write about traveling from Thailand, through Cambodia and into Vietnam, and hopefully give a few minor pointers to anyone thinking of doing a similar thing.

Now, I want to try and put into words some of my thoughts around Thailand and the major spots. In my previous post I very briefly described Phuket and Koh Phi Phi. Now, for anyone that’s been to Koh Phangan and done the Full Moon Party, you’ll understand what I mean when I say it’s crowded. These spots have definitely achieved international recognition and as such, planes around peak times are filled with party goers. Now, those that know me know I like to party as hard as the next guy but the thing about a place like Phi Phi or Phangan is that once it’s been discovered it tends to ‘degrade’ somewhat.

Don’t get me wrong, we had the time of our lives. But once the locals no longer need to make the place inviting, the inevitable happens. Prices go up (often double that of non-tourist filed areas, although it IS an island), standards slip, and the crowd tends to attract a higher quantity of douche bags and Kardashian wannabes. In saying that, though, it is a great time. I guess it’s the difference between a dark, underground club cranking dirty drum and bass through a serious system and a fresh, top-40 focused EDM hub with a VIP area.

New years on Phi Phi WAS superb. I managed to throw off a pretty horrible bout of food poisoning in time to get out and celebrate the arrival of 2016. There’s a bar right at the end called The Only Bar which will sell you a mushroom shake for an inflated price (I think it was around 500THB). 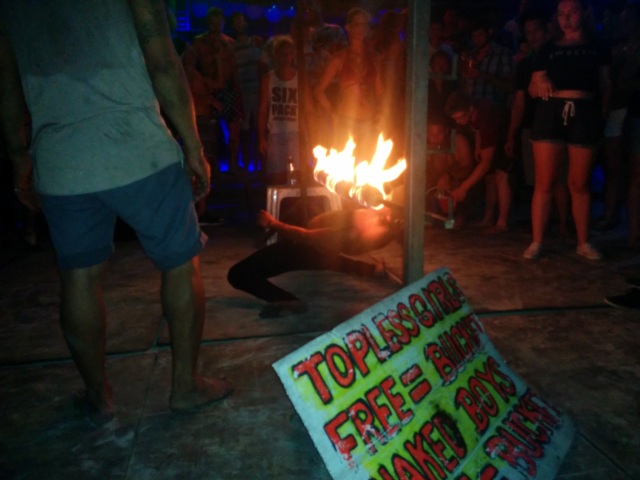 Sorry about the grainy pictures, my phone is bollocks sometimes.

I went back at about 2AM to retrieve my jandals and discovered that the hut which I had left them at was on fire. Some bright spark had let off a flare inside a hut made of straw and everyone was frantically trying to put it out using little buckets from the sea. I did get my jandals back though.

You can buy just about anything you need for your stay at Koh Phi Phi. Cigarettes? Sorted. Ethanol branded as Whiskey? Got it. Weed? Yea, not hard. Contraceptives? They come free with your cigarette papers.

Before leaving Phi Phi we went on a longboat tour between a few islands to do some snorkeling and to check out monkey islands (let me tell you now, you don’t want to piss those little critters off. If it wants your 7up, just give it to him).

The long boats are hilarious. They use diesel car engines and attach props to the end. They don’t seem to mind plowing through 4 meter swells with them either which makes for a fun time, unless you get sea sick. 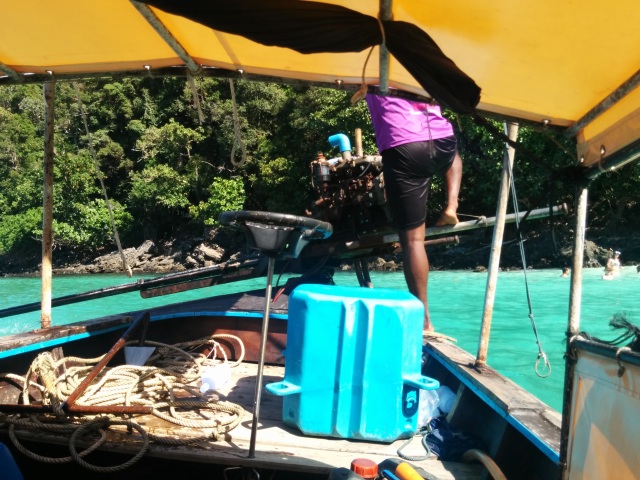 After all was done and dusted on Phi Phi we took the ferry east to Krabi to save going back to Phuket and to see a bit more of that part of Thailand. The ferry costs around 300THB and takes a couple of hours. For the record, Krabi and that general area is a lot nicer than Phuket. Seriously, if you’re on a time constraint and want to see the ‘nicer’ parts of Thailand, I’d give Phuket a miss. Patong beach and some other secluded beaches are nice but there are better things to see and spend your money on.

Found a guest house in Krabi for 200 baht that was nice enough and in a handy location. In Krabi we stumbled across a free local kick boxing match on the side of the road.

Went wandering and found some local markets with some, err, interesting delicacies. 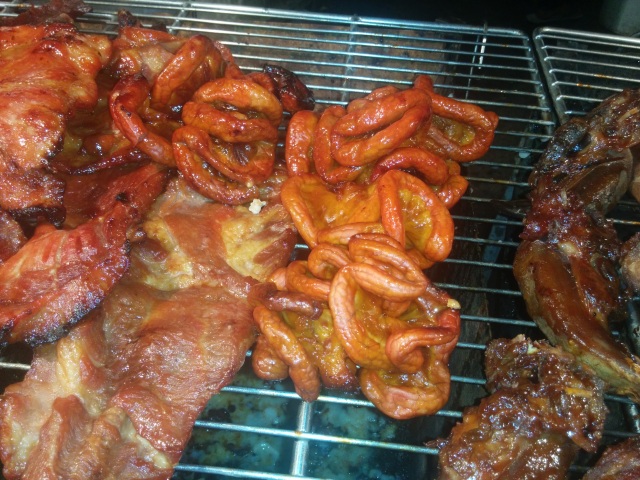 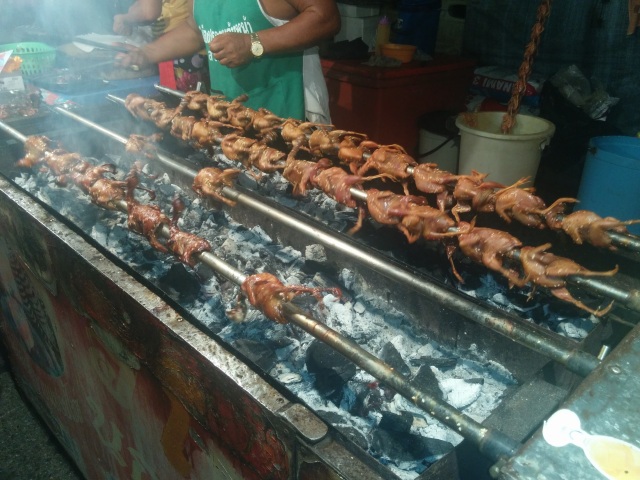 Let me take a moment to implore you to get among some of these banana chocolate Thai pancakes. They’re the business.

As Phil had only a few weeks left and still wanted to see Cambodia and Vietnam before he went back we decided to make our way north east towards the Cambodian border. We took a 3 hour bus from Krabi to Surat Thani, which cost 150 baht. From there we could take an overnight sleeper train to Bangkok. The train cost around 700 baht. The earlier trains were booked so we had to take a late train. The wait was filled by playing cards with new friends Alexy and Tamara. We also were accompanied by a stray dog that would not leave us alone for about 7 hours once it discovered we had food, poor thing. 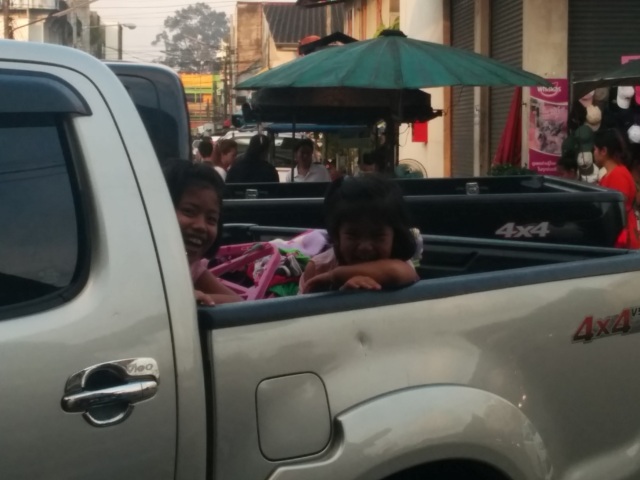 “Holy shit, check out the size of that white man!” 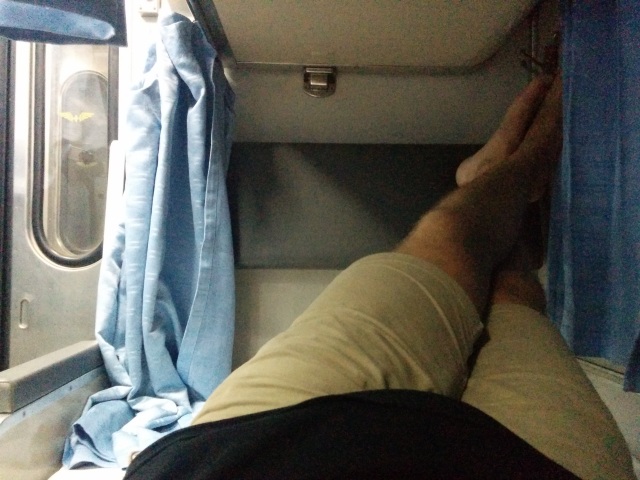 People in Bangkok live, err, rather close to the train tracks.

As we didn’t have a lot of time left to burn in Thailand we decided to flag a night in Bangkok as we’d both been there already. We decided to check out Pattaya, a city around 3 hours mini-bus from Bangkok. We’d both heard of the place and figured we may as well stop in on the way to the border. What. A. Mistake.

Now, I’m sure there is a nice part to Pattaya, much like any other city. But the part of it that we saw (and we didn’t exactly just stay in one spot) was, for lack of a better word, a cesspit. If you’re around 50 years old, have had a couple of failed marriages and are after cheap thrills with a side of HIV, then you might fit right in. The part we saw was filled with brothels, scam artists and superficial attractions. Not my thing. Both of us couldn’t wait to leave. 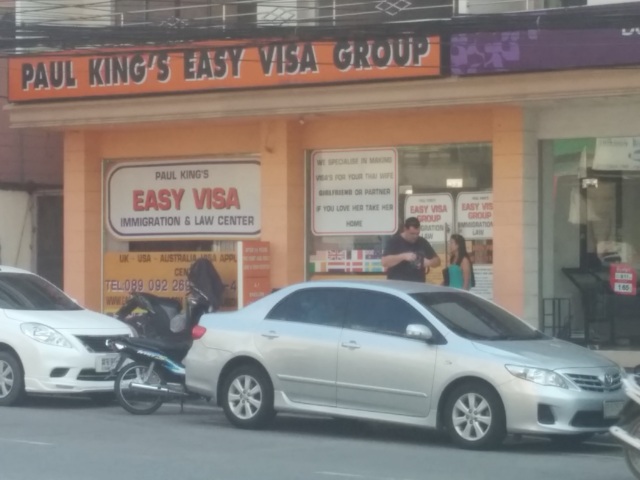 “We specialise in making visas for your Thai wife, girlfriend or partner. If you love her, take her home.”

There were quite a few of these streets; around 300m long and lined with brothels, bars and establishments focused solely on selling you intercourse. There are hundreds of Thai women that practically yell at you to come in when you walk past. So, I got out of the center and got myself a foot massage.

The next morning we managed to get a mini-bus to the border town of Aranyaprathet near Cambodia for 250 baht. We stayed the night there with the goal of crossing the border in the morning to head to Siem Reap. While we were there we found some bumper cars at a festival, and a poodle on a scooter. This lady took off at pace and the poodle continued to chill on the back of the scooter; obviously not his first rodeo. 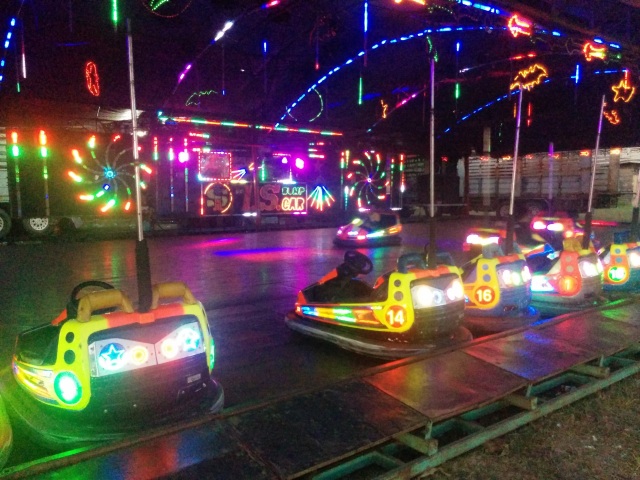 A intercooler plumbed into nothing on a Honda. Classic Thai car mods. 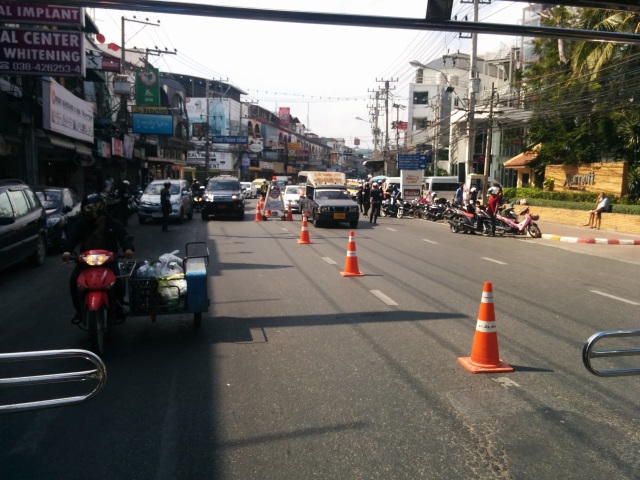 Oh, also.. the army and police have checkpoints everywhere, especially closer to borders. They don’t care about foreigners and are more interested in finding illegal immigrants from Myanmar, Cambodia etc.

In summary, Thailand is as good as I remember it to be. They’ve advanced enough to know what foreigners want and how to make money off them. If you haven’t been, go. You’ll spend less money overall in 3 weeks in Thailand than you would in a week going to Sydney and you’ll have more fun.

Here are just a couple of small pieces of advice for anyone going to Thailand.

Thank for reading. My next post will cover off my time in Cambodia. I hope to have that up in the next few days!